Are Pill Organizers Causing More Harm Than Good for Seniors? 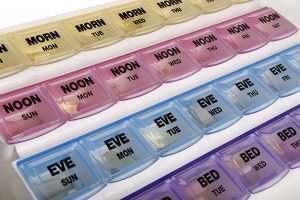 On average, a senior takes approximately 15-18 different prescriptions every day, so it is not hard to understand why so many seniors miss doses or take incorrect doses of their medications. But there are health risks that happen because of these medication errors. Enter the creation of the pill organizer: such a simple way to organize medications by placing them each within the correct slots for the different days or times of the day. Problem answered, right?

Shockingly, a recent study points to a much different outcome. Aging adults who are used to taking medications directly from the original packaging who changed to a pill organizer were inundated with medical problems, including falls, hypoglycemia, and in one case, someone unable to get out of the bathtub until a rescue arrived 12 hours later.

The health concerns, surprisingly, were realized only in the seniors who had started to use the pill organizers. The speculation behind these unanticipated results comes from the notion that the seniors were missing doses or taking their prescriptions incorrectly prior to using the pill organizer, and after using the organizer, were having to deal with side effects from taking full doses of their meds.

Lead researcher Dr. Debi Bhattacharya emphasizes the need for people getting ready to change to a pill organizer to first seek advice from their physician or pharmacist to verify dosage amounts. And she clarifies, “People who are already using a pill organizer without any ill effects should not stop using it as they do seem to help some patients take their medication as prescribed. It’s the switching stage which appears to be the danger.”

Home Sweet Home In-Home Care, Southwest Michigan’s top senior care agency, can help with medication reminders to confirm aging adults take prescriptions when they are supposed to, assist with transportation to pick up prescriptions, and help with noting any negative medication effects that can be reported to the physician immediately. Give us a call at 269-849-9252 for assistance with keeping your senior loved ones healthy and safe.

Need help? Please call us now, or we can call you.